By Colin D. A. MacDonald

On October 22, the Federal Trade Commission launched ReportFraud.FTC.gov, the Commission’s new consumer fraud reporting portal. The new site replaces the FTC Complaint Assistant and provides a more user-friendly, informative, and visually appealing experience for consumers. From government imposter scams to phony weight loss claims, from abusive debt collection to deceptive auto sales, and all sorts of unwanted phone calls, text messages, and emails – we want to hear about all of them. Please help us spread the word and keep Oregonians safe from scams.

After making a report, consumers will be given tailored educational information about next steps that they can take to protect themselves. These materials will be specific to the kind of report that consumers make. If consumers wish to update a report later, they will be given a report number to do so.

The system gives consumers plenty of options for how to report scams that they are concerned about. Consumers can make reports in Spanish at ReporteFraude.FTC.gov. Reports can also be made in French, German, Korean, Japanese, Polish, Spanish, or Turkish at the Commission’s econsumer.gov website. If consumers have questions, the system has a live chat feature or consumers can still call the FTC Consumer Response Center at 877-FTC-HELP (877-382-4357) to make reports by phone. Consumers who prefer to make their report anonymously can do so (but they won’t be able to update the report later).

What happens with your reports? Like its predecessor, ReportFraud.FTC.gov sends reports into the FTC’s Consumer Sentinel Network. The FTC and its more than 3,000 law enforcement partners across the country and around the world use Consumer Sentinel to fight back against scams that hurt consumers and businesses who play by the rules. We don’t publicly post the reports and we don’t contact businesses about individual reports. We use them to build larger law enforcement actions to put an end to the fraud.

Who is reporting fraud to the FTC? Between the old FTC Complaint Assistant and our partner organizations, we gathered more than 3.2 million reports of consumer fraud in 2019 alone. Oregonians accounted for more than 33,000 of those reports, with government imposter scams and identity theft by far the most common reports from the state. You can learn more about the most common reports in the country, state, or metro area on the FTC’s website. 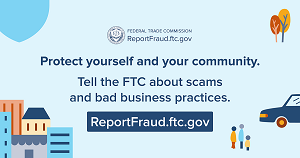 Protecting Oregonians – particularly the most vulnerable consumers – is a team sport. Filing a report with the FTC and seeking help from a private attorney are not mutually exclusive. This new tool in our shared toolbox will help us fight back against scammers and unscrupulous businesses. If you or an organization you are involved with have a website or social media, please consider linking to ReportFraud.FTC.gov using some of the images, videos, and social media badges available at ReportFraud.FTC.gov/Partners.

Colin D. A. MacDonald is a consumer protection attorney for the Federal Trade Commission’s Seattle-based Northwest Region. The views expressed in this article are his own and do not necessarily reflect those of the Commission or of any individual Commissioner.